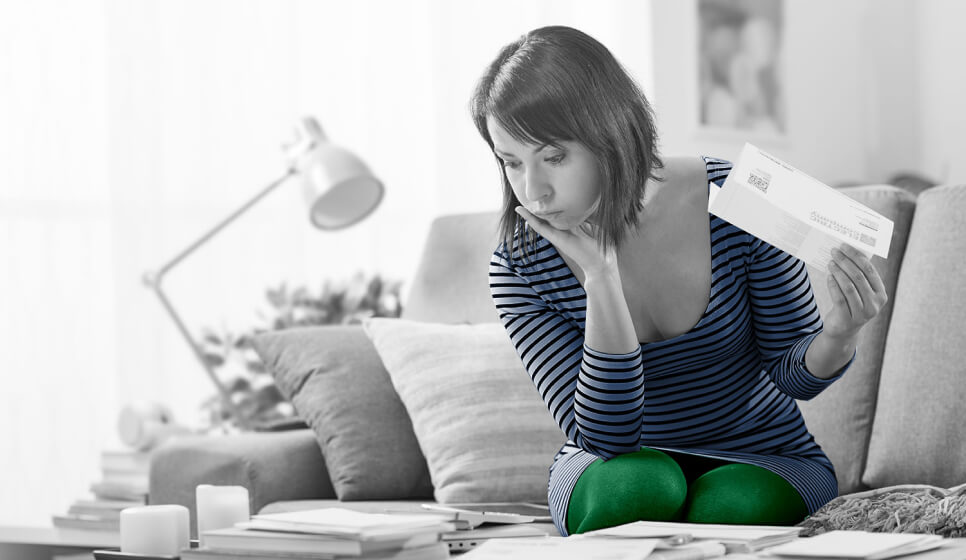 Electricity tariffs are how electricity suppliers charge you for their services.

When it comes to the charges on your energy bill, many people remain confused about what different tariffs are available.

Understanding tariffs and how they work can save you some money in the long run.

You can better understand your electricity consumption and how to choose the tariff that offers you good value.

Tariffs refer to the charges that an electricity supplier bills you for your energy usage. These include both supply and usage charges.
A time of use tariff charges more for using your electricity during peak hours. It also charges less for using energy during controlled load hours.
A controlled load is a major appliance that is separately wired and usually operates exclusively during a set period of time.
COMPARE & SAVE

What are Supply and Variable Charges?

No matter which tariff structure you select, your bill is usually divided into supply and variable charges.

The supply charge is unaffected by your energy consumption.

It is listed on your bill as a "supply charge" or "service charge," and refers to a daily charge you receive regardless of how much energy you use.

The supply charge is the charge you receive for being connected to the energy grid.

Some suppliers offer discounts on the supply charge, which benefits households that don't use very much energy.

The second charge on your bill is a variable charge. Most of the time this appears as a "usage charge" on your bill.

For electricity, suppliers charge based on cents per kilowatt hour (kWh).

Most suppliers offer discounts on usage charges, which are usually the largest portion of your bill.

What are Peak and Controlled Load Usage?

Peak and controlled load peak usage hours are two of the terms you'll see a lot when looking at electricity consumption.

They may appear on your bill whether or not your plan even includes peak and controlled load hours for billing purposes.

Not all plans use peak and controlled load rates.

Most suppliers allow you to select a single-rate tariff or a time of use tariff.

A single rate tariff charges you the same amount for your energy consumption, regardless of the time of day you use the most energy.

These plans are good for those who use the bulk of their electricity during peak hours.

In contrast, a time of use plan charges higher rates during peak hours, so you'll pay more for the energy you use during these times.

Your electricity bill may still say 'general usage' even if you have a single rate tariff.

In this case you're not being charged more, it's simply how the energy supplier categorises your energy use.

Time of Use Tariff

The time of use tariff divides the day into peak hours and controlled load hours.

Peak hours vary depending on your supplier and your plan, but tend to be during times when more people are using electricity.

For example, weekday afternoons and early evenings are likely to be peak times.

Time of use plans tend to be better for those who use most of their energy in the morning or at night.

If it's feasible to do so, you could save money by waiting to use more electricity during controlled load hours.

What is Block Pricing?

Your electricity supplier may charge you using block pricing.

In this tariff type, your usage is broken into two or more blocks of kilowatt hours.

Your supplier charges the first energy block at one rate.

After you exceed the specified limit, you move into the second block and are charged a different rate.

Some suppliers charge a lower rate for the first block and increase the rate for subsequent blocks, while other suppliers do the opposite.

The majority of energy suppliers use two blocks for pricing, but some go as high as five.

Block pricing can save you money if you can access a pricing model that suits your usage.

Smaller households that don't use much electricity may be able to stay within the first block and pay a lower rate.

Larger households that use high amounts of electricity could benefit from block pricing that starts at a higher rate and decreases as usage goes up. 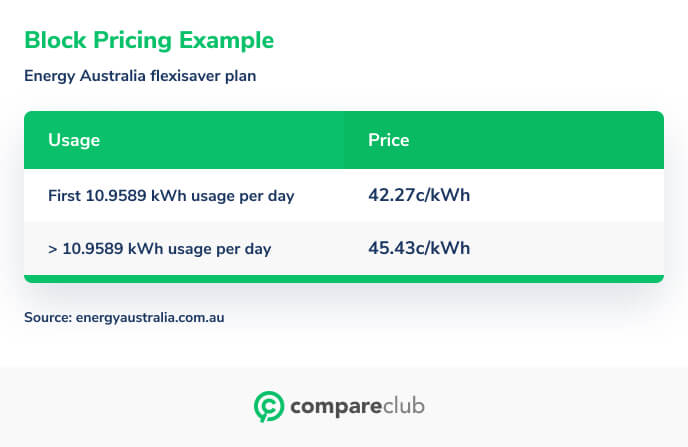 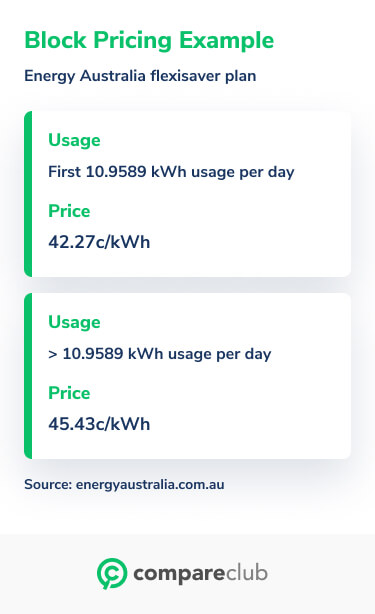 What is a Controlled Load?

A controlled load tariff is one of the more obscure tariffs you can find through electricity suppliers.

It's worth considering controlled load tariffs, because they could save you money.

With a controlled load tariff, you are charged separately for the electricity used to power a specific appliance such as hot water or slab heating.

The controlled load appliance runs on a separate circuit than the rest of your home, and may have its own meter.

The supplier charges one rate for your normal electricity usage, and a different rate for the controlled load.

The catch to controlled load tariffs is that the appliance can only be used during a specified time frame.

In New South Wales and Queensland you can choose between controlled load one and controlled load 2: the first option is cheaper, but the second operates under a longer time frame.

Controlled load tariffs are designed for appliances that don't need to run continuously, which is why they work well for hot water systems.

Can a Controlled Load Tariff Save You Money?

Some suppliers, however, provide discounts with no strings attached.

Weigh up these discounts carefully when making your decision.

The amount of money you save will also depend on a few factors.

Your location and the supplier's rate will determine whether or not it's worth separating one or two of your major appliances on a controlled load.

To access a controlled load tariff, customers will typically need to make arrangements with their electricity provider. 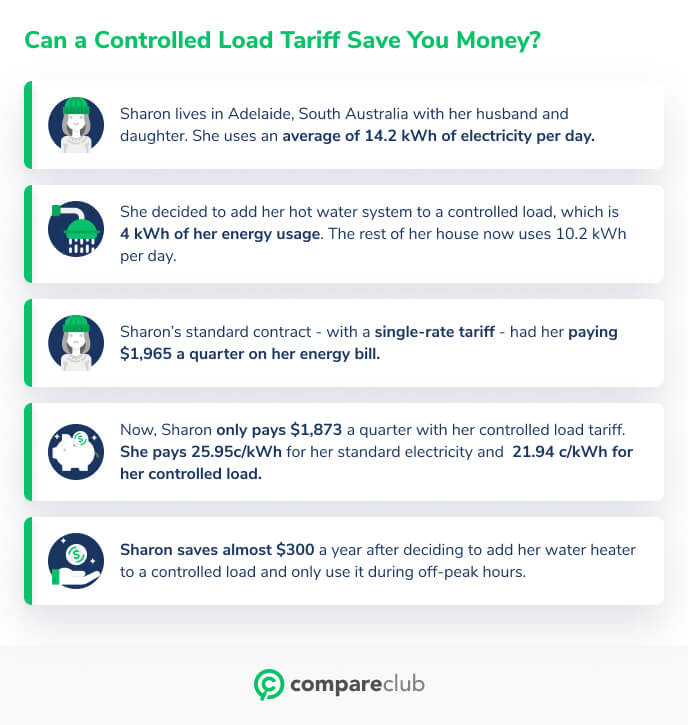 What is Solar Feed-In Tariff?

A solar feed-in tariff offers an opportunity for further savings if you have solar panels on your home.

Your solar system generates energy, which can be sold back to the grid at a rate per kilowatt hour.

Rates are set by your supplier, though some states also offer solar feed-in tariffs.

How to Determine Your Electricity Usage?

Everyone's electricity usage is different, which means no one tariff is right for everyone.

To figure out which tariff is a good fit for you, look at your bill and determine your energy usage before committing to a plan.

Use our comparison tool and helpful guides if you need help understanding your energy usage and the best deal for you.